I first got into Doctor Who back in 2012. I was flipping through channels and came across one of the earlier episodes. It caught my attention so I started watching the first series that day and instantly became a fan. I was drawn into the world of the doctor and the first time I saw the TARDIS was an exciting moment. I spent the whole summer binge watching all the series’s that were out. I also saw a great deal from the classic show. I will admit that my love for the show has dwindled in recent years. I feel that the quality of the writing has been overall weak and there’s been a lack of danger. I didn’t feel anything when a character died because they would almost always come back in some way. But now we’re entering a new era; Chris Chibnall has taken over as the new show runner and head writer. We have new companions, a new TARDIS, and of course, a new doctor. Series 11 has begun and today, I’ll be reviewing the premiere episode.

After regenerating into her thirteenth incarnation, the doctor crashes to earth where she and three others are brought together to stop an alien threat that is terrorizing a peaceful town.

Right off the bat we’e introduced to our new companions; Ryan Sinclair, Graham O’ Brien, and Yasmin Khan. I instantly liked them, they felt like real people that I could relate to. The performances are on top form and they have great chemistry with one another. There was a bit more focus on Ryan and Graham then with Yasmin. In terms of the story it made sense, but it did make me eager to see more of her. Characters and drama are definitely Chibnall’s strongest areas, especially if you’ve seen his crime drama show Broadchurch. I’m really looking forward to seeing how they develop over the course of the series.

The look and tone of the episode is much darker and grittier then past episodes. If you’ve watched Doctor Who before then you’ll definitely notice the update in quality. It’s clear that the BBC is putting in more money. One fan told me that the tone felt like Torchwood, a spin off to Doctor Who. Despite the darker tone the show still has that same quirky fun that is loved by kids and adults alike.

The alien threat in this was also good but it was definitely the weakest part of the episode. It was a means to get everyone together, which tends to be the case when introducing a new doctor, and in that way it worked. Hopefully this will improve in later episodes. 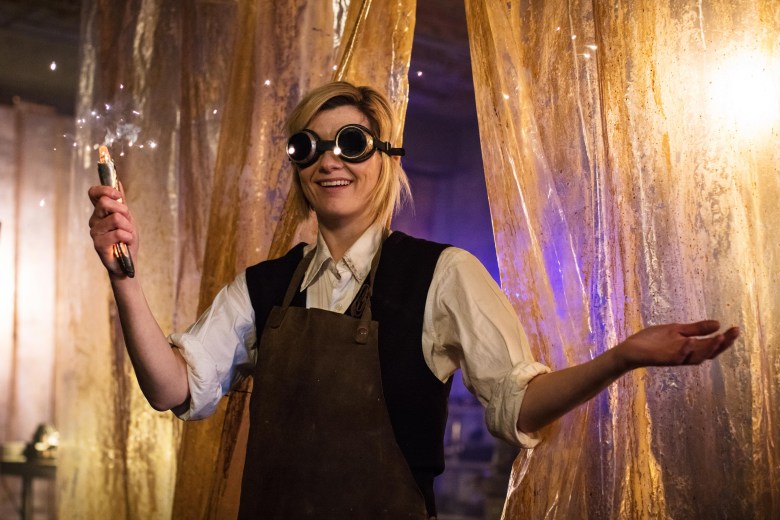 Finally, we have Jodie Whittaker as our new 13th doctor. Obviously there was a lot of hype around her. She’s not just the new doctor, she’s also the first female doctor in the shows history. Most fans were overjoyed, but of course there were a few that weren’t pleased that a woman was taking over the role. It’s sad but also ironic since change is the foundation of the show and the reason why it’s survived for over fifty years.

As soon as she appeared on screen I couldn’t take my eyes off her. She’s funny, energetic, and inclusive. A highlight of the episode for me is when she creates her new sonic screwdriver. Chibnall has described her as “the greatest friend you could wish to have as your guide around the universe.”

Overall this premiere was a big success, all the changes made have paid off and I am really looking forward to seeing how this series plays out. Also, if you’ve never watched the show before, this is a great entry point. Chibnall wanted his first series to be welcoming to newcomers. All that’s left now is to wait for the next episode, which starts tomorrow!